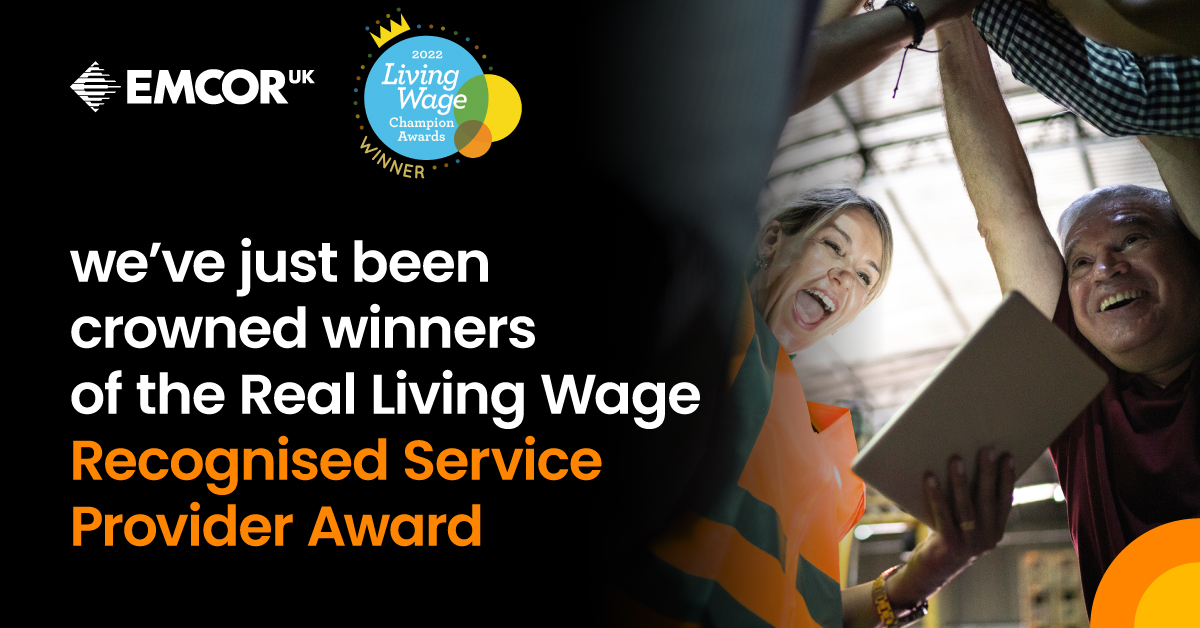 EMCOR UK, is delighted to be announced as the winner of the Recognised Service Provider Champion award at the 2022 Living Wage Champion Awards.

The awards celebrate individuals and organisations that have made an outstanding contribution to the Living Wage movement.

EMCOR UK was accredited as a Living Wage Foundation Recognised Service Provider in May 2021 and planned to pay all of its 4,170 employees the Real Living Wage (RLW) or above within two years. This implementation was accelerated to help ease the impact of the increased cost of living, and since 1st April all employees are earning the RLW or above – more than a year ahead of schedule.

In the last year EMCOR UK has transitioned existing customer accounts to the RLW, as well as including the RLW in all tenders and bid strategies. This has promoted the RLW to EMCOR UK clients and other service providers.

Keith Chanter, CEO at EMCOR UK, said: “We are committed to creating a better world at work for all of our employees, whether that’s through increased pay, wellbeing initiatives or providing clear pathways for career progression. Paying all of our employees the Real Living Wage or above was a huge milestone and this award cements our position as a leading service provider when it comes to the Living Wage. It’s great recognition and we’ll continue to work closely with the Living Wage Foundation to support our employees.”

Katherine Chapman, director at the Living Wage Foundation, said: ​"Despite the continuing challenges of the past two years, the Living Wage movement has never been stronger – we’ve continued to grow, welcoming our 10,000th employer, and tonight we come together to recognise some of the outstanding leadership these employers have shown. The Living Wage Champion Awards 2022 are a fantastic opportunity to celebrate the importance of a wage that covers the cost of living and the value this provides for workers and businesses, particularly during the cost-of-living crisis, and I warmly congratulate EMCOR UK on their deserved award.”

The Living Wage was launched by Citizens UK in 2001. The RLW is calculated annually according to the basic cost of living in the UK and expressed as an hourly wage rate for both inside and outside London.