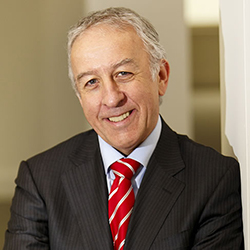 Keith graduated with a degree in industrial economics from Nottingham University in 1979 and went on to qualify as a Chartered Accountant in the London office of Deloitte Haskins & Sells (now PwC) in 1982.

In 1986, Keith joined BOC Group plc, the global industrial gases company, where he spent 11 years holding a number of senior- and board-level positions for several of the organisation’s operating companies and business divisions.

In 1997, he moved to Bristow Helicopters Ltd as Group Finance Director. Then, in 1999, Keith was promoted to CEO to spearhead a turnaround initiative.

After a few years in consultancy, Keith joined EMCOR UK in July 2007 as Group Finance Director. In November 2008, he became CEO.

Keith believes that relationship building, be it with employees, customers, or supply partners, is the key to securing long-term business success. This, coupled with a constant focus on delivering high-quality, cost-effective, and sustainable solutions, are his main drivers for EMCOR UK.

Of course, safety is one of EMCOR’s core values and is Keith’s first priority as CEO. EMCOR’s ZERO Accident Programme (ZAP) instils employees with the conviction that every accident is preventable. This is supported by a clear leadership style that accepts no compromise in safeguarding employees and the welfare of those who come into contact with EMCOR UK’s services day to day.

In his spare time, Keith can often be seen enjoying motorsports or “pushing the pedals” on his road bike.