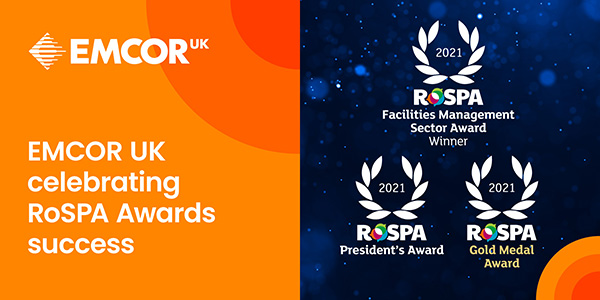 EMCOR UK is thrilled to have been awarded the RoSPA Sector Award for FM at AWE for the fifth consecutive year as well as winning the President’s Award at BAE Systems North and Gold Medal Awards at United Utilities, Thames Water Utilities Ltd, Defence Science and Technology Laboratory (DSTL) and GSK.

Organisations receiving a RoSPA Award are recognised as being world-leaders in health and safety practice. Every year, nearly 2,000 entrants vie to achieve the highest possible accolade in what is the UK’s longest-running H&S industry awards. The Industry Sector Awards recognise organisations that have excelled in their sector and the President’s Award is awarded after winning 10 consecutive Gold Medal Awards.

Jonathan Gawthrop, Executive Director, Wellbeing Sustainability & Assurance for EMCOR UK, said: “It’s an exceptional achievement to have been awarded six RoSPA Health and Safety Awards and this reflects our passionate commitment to ensuring that all employees are safe at work and demonstrates how we work in partnership with our customers to make their workplaces safe. To have won the FM Sector Award at AWE, the President’s Award at BAE Systems North and four Gold Medal Awards is absolutely outstanding, and I am so proud of all those who have worked so hard to achieve this success.”

Ian Meaden, Executive Director, Operations for EMCOR UK, commented: “We are thrilled to have won so many RoSPA awards at such a high level. The competitive Industry Sector Award is a prestigious achievement which recognises organisations that have excelled in their industry sector and is testament to our collaborative and long-standing relationship with AWE and our shared commitment to achieve industry leading health and safety management standards. The fact that we have won this top award five years in a row is an incredible achievement for our team that we are so rightly proud of.”

Julia Small, RoSPA’s achievements director, said: “The RoSPA Awards scheme is the longest-running of its kind in the UK, but it receives entries from organisations across the globe, making it one of the most sought-after achievement awards for health and safety worldwide.

“RoSPA is very proud of the achievements of its entrants, and with our awards we recognise the best of the best, those organisations that have gone the extra mile, raising the bar for the delivery of safety in the workplace. Employees, wherever they may be should be able to go to work safe in the knowledge that they will return home unharmed and healthy at the end of every day. Our RoSPA Award winners are central to achieving this goal. By entering they are driving up standards and setting new safety benchmarks for organisations across the world. Currently, around seven million people are directly impacted by the RoSPA Awards, but the scheme’s global influence is even wider – with nearly 2000 organisations from 46 countries represented this year. I would also particularly want to thank our main sponsor NEBOSH, the National Examination Board in Occupational Safety and Health – for their continued support for the 16th consecutive year.”