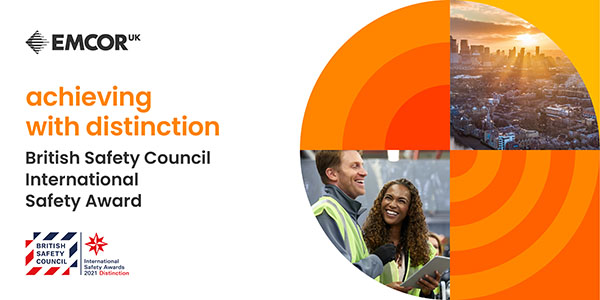 EMCOR UK has won two International Safety Awards - a distinction for EMCOR UK and a pass for the EMCOR UK team at GSK, one of its customer sites - in recognition of its commitment to keeping its workers and workplaces healthy and safe during the 2020 calendar year.

Now in their 63rd year, the International Safety Awards recognise and celebrate organisations from around the world which have demonstrated to the satisfaction of the scheme’s independent judges their commitment to preventing workplace injuries and work-related ill health during the previous calendar year. The awards also recognise organisations that have shown commitment to wellbeing and mental health at work.

Mike Robinson, Chief Executive of the British Safety Council, congratulated EMCOR UK on their success in winning two International Safety Awards: “The British Safety Council applauds EMCOR UK on their achievement. These awards are in recognition of their commitment and hard work to keep their employees and workplaces free of injury and ill health.

“The vision of the British Safety Council is that no-one should be injured or made ill through their work – anywhere in the world. Achieving this requires more than complying with legislation; it means people committed not only to health and safety but also more and more to workplace wellbeing and impelling others to follow suit.

“Our heartfelt congratulations to EMCOR UK. All of those working at EMCOR UK should be enormously proud of their achievement.”

Nicola Pakenham-Walsh, Head of Risk Assurance said: “This is an outstanding achievement which recognises the hard work and commitment of all our employees to support our health and safety management system. This success involved EMCOR UK demonstrating their commitment to health and safety through their response to the ISA questions and providing evidence of our robust management systems to support our submission based on working documentation maintained by our account teams.”

Jonathan Gawthrop, Executive Director, Wellbeing Sustainability & Assurance for EMCOR UK, said: “We are so proud to have won two International Safety Awards from the British Safety Council. It is especially rewarding to gain a distinction for EMCOR UK for a second consecutive year.  Our purpose is to create a better world at work for our employees and our clients. A fundamental part of this is forming and maintaining environments where health, safety and wellbeing is as good as it can be.

“Following our recent success with the British Safety Council’s Sword of Honour Award, the ISA awards reaffirms the robust management systems we deploy and is a testament to the hard work of all our employees who strive to keep themselves and everyone safe and well at work.“