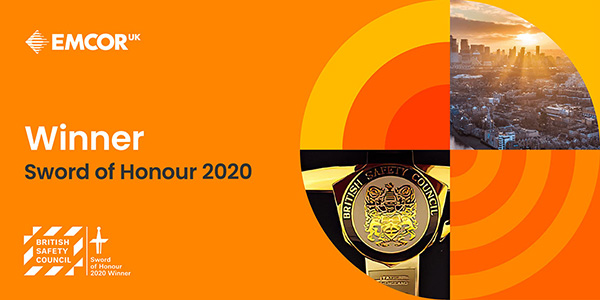 EMCOR UK is thrilled to have been awarded the prestigious Sword of Honour from the British Safety Council. This award was given, in December 2020, to only 66 organisations worldwide which demonstrated excellence in the management of health and safety risks at work.

Lawrence Waterman, Chairman of the British Safety Council, said: “On behalf of the board of trustees and staff of the British Safety Council I would like to congratulate EMCOR UK on achieving the topmost standards of health, safety and environmental management.  Accomplishing such distinction takes real commitment and professionalism. We are delighted to have supported you in your achievements in what has been an unprecedented year given the COVID pandemic.”

In order to be eligible for the Sword of Honour, EMCOR UK first had to achieve the maximum five stars in the British Safety Council’s health and safety management audit which concluded in February 2020. As part of its submission, EMCOR UK also demonstrated to an independent panel of experts that it had a proven track record and culture of best practice for excellence in its health and safety management, that runs throughout the business – from the shop floor to the boardroom.

Commenting on the initial audit, Steve Readman, auditor for the British Safety Council, said: “During my audit of EMCOR UK, I was particularly impressed by the commitment to safety shown by all stakeholders. An excellent programme of continuous occupational health and safety improvements was evident at all locations visited. Some first-rate culture and behavioural engagement tools helped contribute to the high score the company achieved at audit. I am delighted they have won the prestigious Sword of Honour in recognition of best safety practice.”

Nicola Pakenham-Walsh, Head of Risk Assurance, said: “This is an outstanding achievement which recognises the hard work and commitment of all our employees to support our health and safety management system. This success involved a rigorous assessment process and demonstrates the strong collaboration between our site teams and customers who participated in the audit.”

Jonathan Gawthrop, Executive Director Wellbeing Sustainability & Assurance, said: “This is wonderful recognition for the EMCOR UK team which consistently strives to do their best in support of our dedication to delivering exceptional health and safety performance which is a critical priority wherever we operate.”